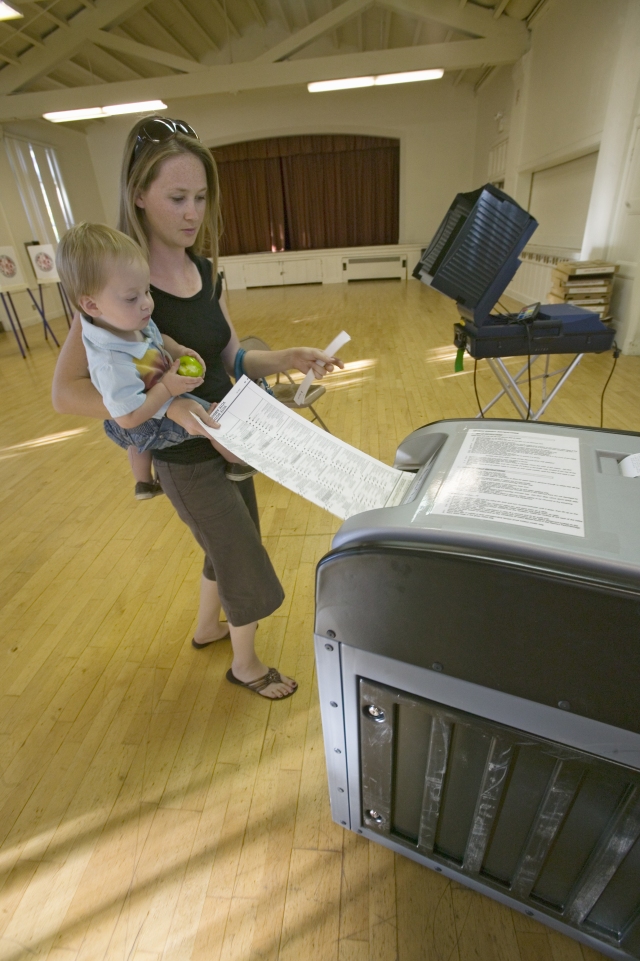 Voting in the Iowa June primary at the polls in Chickasaw County was easy.

There was no long line, although the floor was clearly marked for social distancing guidance.

A hand sanitizer station was located just inside the front doors, and precinct election officials worked behind some type of plexiglass.

A touchless scanner was positioned so the voter could easily hold up either a driver’s license or voter identification card to have the bar coding on it scanned. Officials, using computers, quickly read and verified this information authorizing the individual’s right to vote.

Paperwork and a new pen were slid underneath the glass to the voter. After signing it, the same pen stayed with the voter in order to use it for the ballot.

The ballot was carried to a voting station, and candidate selections were confidentially made. Voters were instructed to keep the pen, and stations were wiped down and disinfected regularly by officials.

Next the voter slid the ballot into the voting machine, where he or she could physically watch the vote being counted.

And that’s the important part. Only at a precinct or polling place do voters maintain full custody of their vote.

COVID-19 is convincing many that absentee ballot voting is the only way to go. And for the elderly and those with underlying health conditions, it will be the best and safest choice.

But based upon this voter’s experience at the polls, voting seemed to be 10 times safer than going to a grocery store, convenience store or dollar store. And probably 100 times safer than even small social gatherings with friends and family.

There’s the potential for quite a few things to go wrong with absentee ballot voting.

The voter gives up ownership of the ballot to the county auditor’s office for safe handling until Election Day. County employees are professional. But, like the rest of us, they’re not perfect human beings. Surrendering your ballot to another person increases the chance for error.

Absentee ballots must by reviewed at the county level with an absentee board. Missing signatures, signatures that do not closely match or other directions not properly followed could result in ballots being rejected and not counted. At the polling place, election officials obtain information from the voter and most questions are typically addressed immediately and resolved.

And the absentee ballot must be postmarked correctly. That doesn’t always happen.

The Census Bureau collects data in election years and determined that 137.5 million voted in the 2016 election. However the Office of the Clerk of the U.S. House of Representatives reported only 136.6 million qualified votes.

Off by about a million. Maybe the Bureau’s data was incorrect. Or, maybe some absentee ballots didn’t get counted for any number of reasons.

What we do know is that President Donald Trump won Michigan by 11,000 votes and lost Minnesota by 45,000. Each vote matters.

We’ve become a freedom-lazy country. The United States recently ranked 26th in voter participation out of 32 developed countries, according to the Organization for Economic Cooperation and Development.

Low voter participation rates have been pretty regularly reported over the years. This isn’t news to anyone.

Maybe that’s why the absentee model is gaining ground. There may be a tendency to mentally give ourselves a standing ovation for doing any kind of voting at all. After all, it’s better than doing nothing.

Our freedoms, though, shouldn’t hinge on “good enough” kind of voting.

Absentee ballot voting has its place. There are some who, logistically, can’t make voting happen on Election Day and depend on this option. And now with COVID-19, it’s a good choice for the most vulnerable.

For everyone else, though, precinct voting versus absentee voting is an important citizen’s choice. Yes, it’s still a free country.