Merry Christmas to our friends and family!

Another year has gone by quickly. Hope all is well with you and your loved ones as we enter this holy season.

Here’s what’s been happening in our family… 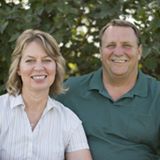 area. Rachael also started a part-time photography business at www.beyoutifulphoto.com. She’s been kept busy shooting weddings, family portraits, and senior photos. She also took time to take this picture of Dean and I, which we needed for our church pictorial directory.

Sure is nice having a professional photographer in the family!

Probably the biggest event in the family this year is that we have another one graduated from college! Louis graduated in May from Iowa State University with a degree in political science and a minor in history. He is working for the circuit court in St. Louis, Missouri. I now have three kids in three states. It’s getting tougher and tougher to get us all together in one place. St. Louis is a six-hour drive from Lawler, so it still works for him to get home when he has a three-day weekend. He was home for Thanksgiving, and will be home again for Christmas.

Olivia is in her third year at Iowa State. She’s studying supply chain management and economics. The college has the saying, “Choose your adventure,” and Olivia has been taking that quite seriously. This summer she interned for Land O’Lakes, and the internship culminated in a trip to Africa. She was learning about food insecurity issues in the world, and tackled it from a logistics point of view—trying to implement better ways to store and transport food in order to reduce food waste.

I love this picture because it shows that no matter who you are or where you live, everyone loves a selfie.

For Dean and I, we’re still farming and running a repair shop in Lawler. We did get in a couple of glorious Minnesota fishing trips this summer. Being surrounded by all the beauty that nature has to offer was so good for the soul. Now I know why Mom and Dad made Minnesota fishing trips a priority in their lives. And I actually caught fish. Gotta give a shout out to friends, Paul and Julie Rausch, for teaching me how to catch a lunker!

My biggest news, though, is that I made good on a 2014 New Year’s Resolution to start a blog. I write commentary once a month about politics, religion or culture (three safe topics!) at www.movingtheconversationalong.com. I converted a small bedroom upstairs into my office. There’s barely room for a desk and chair, computer and printer, and rocker and footstool—but I love it. Some of my happiest moments this year have been reflecting, reading and writing in my little hobby room.

For those of you who follow my blog, you might have noticed that my blog went dark in August. Something happened in August. Dean’s mother, Edna, passed away, and it took the wind out of our sails. She had been battling Alzheimer’s for a couple of years, but I think everyone felt they had much more time left with her. And so, her sudden passing was a shock. Alzheimer’s is a devastating diagnosis for anyone, but it seemed especially cruel for Edna because she was such an absolute force in life before the disease. She’s reunited now with two that she was missing so much—her son, Dana, and her granddaughter, Melissa. Rest in peace, Edna.

Faith, family and friends. Honestly, what else is there?

I hope you are able to celebrate the birth of Jesus with all the very important people in your life—total happiness with your total family.

It’s the least wonderful time of the year, when it comes to renewing individual health insurance.

Before Obamacare, millions of families in this country were doing the right thing—responsibly purchasing individual health insurance within a free market. And paying for it themselves, without the help of a government subsidy.

The monthly premium for 2016 will jump to nearly $1,000. There are fewer and fewer of us in these remaining, old plans, and the premiums reflect it. In the past, we were able to shop around for other policies with various coverages and premiums that would best suit our family.

Now, our only option is Obamacare.

To participate in the Affordable Care Act exchange program, our family’s monthly premium would be $1,600 for a $6,700 deductible. Not very affordable.

The majority of Obamacare enrollees, 86 percent, take advantage of government subsidies to get monthly premiums down to a reasonable rate. But we, and many others, took pride in purchasing our own insurance before Obamacare without subsidies.

You give that up with Obamacare. It sends the message to families that they’re not capable of taking care of themselves, that they need the government to do that for them.

Obviously, the old ways weren’t perfect either. Underwriting for pre-existing health conditions in the individual market meant many were simply unable to secure insurance.

There might have been another way, another solution, without the government becoming so heavily involved with nearly one-fifth of our economy.

According to the U.S. Census Bureau, there are about 130,000,000 households in the country. Included in that number are the poor and the elderly. Medicaid and Medicare are in place to protect these vulnerable groups.

The remaining households are workers. Many receive some type of health insurance through their place of work, where the employer contributes to a portion of it. And it’s this type of group insurance that doomed the individual health insurance market. With fewer in the market needing individual health policies, insurance companies would underwrite for pre-existing conditions—keeping their plans, funded by smaller numbers, solvent.

A movement away from employer-funded group insurance and toward individual and portable health insurance—where every family unit purchases its own health insurance in a competitive market—may have been a better solution. Imagine tens of millions of households purchasing health insurance policies from hundreds of competing insurance companies offering dozens of options. It may have better provided competitive rates and satisfying plans for all. Middle-aged couples could have selected a plan that didn’t include costly, maternity coverage. Young, single adults could have chosen an inexpensive major medical policy. Consumers would have been free to make all kinds of coverage decisions that were best for their families—not dictated by a group employer plan or by Obamacare.

In the current environment, this would be tough to change. Obamacare penalized employers ($100 a day per employee) who didn’t offer a group plan but were providing some type of reimbursement to employees who were purchasing health policies off the individual market. On the other hand, employers who contribute to a group plan are rewarded with tax breaks.

In a world without Obamacare, the opposite would be more sensible. Employers who reimburse employees, in some way, for individual health plans should be rewarded with tax breaks. Employers who contribute to group plans, which harm the individual market, should lose tax breaks.

Under this scenario, employees would still receive a health care benefit from their workplace if employers were allowed to reimburse them, in some way, for individual plans. What’s different is that employees regain control of choosing a plan that’s right for their family. And in this highly mobile world, individual and portable health insurance would make it easier to change jobs—or even start a business—because insurance would travel with you. You’d own it.

Some lessons learned, though, from Obamacare would be useful in moving away from group plans and toward more individual policies. Eliminating underwriting is one. With many more customers entering an individual health insurance market, it would have been far easier to spread the risks and absorb costs associated with pre-existing health conditions. Also, requiring all individuals to have some type of health insurance or be subject to a reasonable fine was another step in the right direction. If you have a car, you’re required to have car insurance. If you have a body, you should be required to have health insurance. Eliminating underwriting and requiring all individuals to be insured go hand in hand. Otherwise, it would be tempting not to purchase health insurance until you became unhealthy.

The federal government could also help a movement toward individual plans by allowing health insurance companies to sell across state lines to increase competition, and by enforcing antitrust laws against monopolies.

Fostering growth in the individual market, instead of decimating it, might have been a more workable and less traumatic upheaval in the health sector.

Unfortunately, we don’t live in that world today. We have Obamacare. And monthly premiums of $1,600.